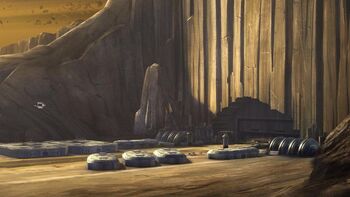 Fort Anaxes was a remote Republic military base during the Clone Wars. It was abandoned following the war's end and was later visited by Hera and Sabine. They found that the base had become infested with Fyrnocks which attacked the rebels. They were able to narrowly escape the creatures with the help of Rhydonium.

Retrieved from "https://starwarsrebels.fandom.com/wiki/Fort_Anaxes?oldid=14021"
Community content is available under CC-BY-SA unless otherwise noted.