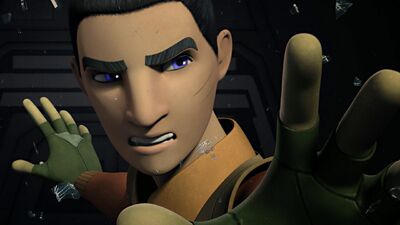 A frequently asked question after the finale is, why did Empire Strikes Back cite the Death Star as the Rebellion's first Major victory when they'd already liberated a whole planet (aside from the film coming out decades before Rebels even started) and I think I know - it wasn't the Rebellion's  victory it was Ezra's.

Think about it, frequently in season 4 they remark that Mon Montha and the rest of the Rebellion abandon Lothol, and it was only the Ghost crew who would come to fight for the planet. So the Rebellion didn't take the credit for Ezra's victory, as it was his plan and several memebers of the team that fought to save Lothol came specifically for Ezra.

(edited by Medafan 53)
Family Reunion - and Farewell
This post is locked.

What did everyone think of the final episode of Star Wars Rebels season four?