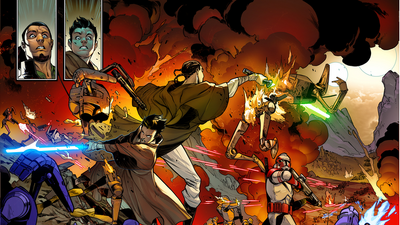 The Clone Wars, also known as the Clone War, was a three-year galactic conflict between the Galactic Republic and the rebelling Confederacy of Independent Systems near the end of the Republic. The war was secretly being manipulated by Sheev Palpatine; publicly, he was the Supreme Chancellor of...

In a surprise announcement at San Diego Comic-Con today, Lucasfilm released a trailer revealing that 12 of the remaining episodes of Star Wars: The Clone Wars, left unaired due to the show's cancellation in 2013, would be fully finished and released.

If you need me, I'll be on the ceiling jubilantly shouting into my pillow.